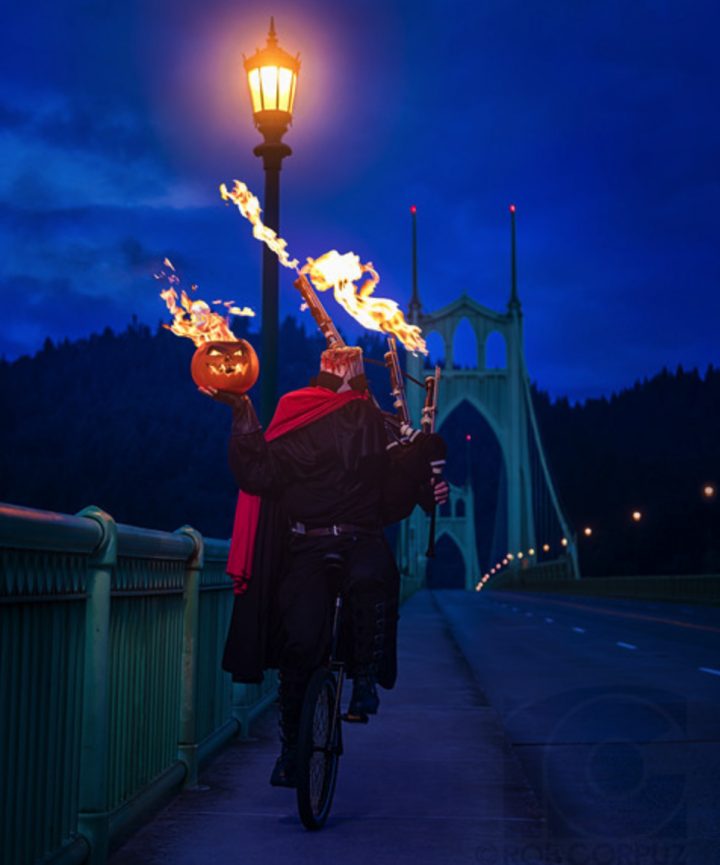 Weird Portland United recently sat down with fine art photographer Rob Corpuz to discuss the creative process behind his exceptional photography. You may be familiar with some of the viral images Rob has produced in recent months, including The Unipiper as The Headless Horseman, as well as DJ Umlaut.

Weird Portland: Rob, what led you to become a fine art photographer?

Rob Corpuz: I’ve always loved great photos, but I became frustrated that the snapshots I took inevitably paled in comparison with what I was trying to capture, so one day I finally decided to research why that was the case.  That led me down a rabbit hole of obsessively consuming books and websites, getting the necessary gear, and getting out there and practicing. Lather, rinse, repeat. The more I learned, the more I wanted to learn.

I became fascinated by all of the compromises inherent in photography, where there is rarely, if ever, only one solution to a given problem.  A photographer needs both the creative and technical sides of the brain. You decide which tools to bring and to use, choose the balance between light and shadow, sharpness and blur, and ultimately, what stays in the rectangle, and what doesn’t, along with countless other compromises.  For me, that continual quest to find a happy medium, and the fact that every shoot is different and brings with it unique challenges, keeps things fresh. 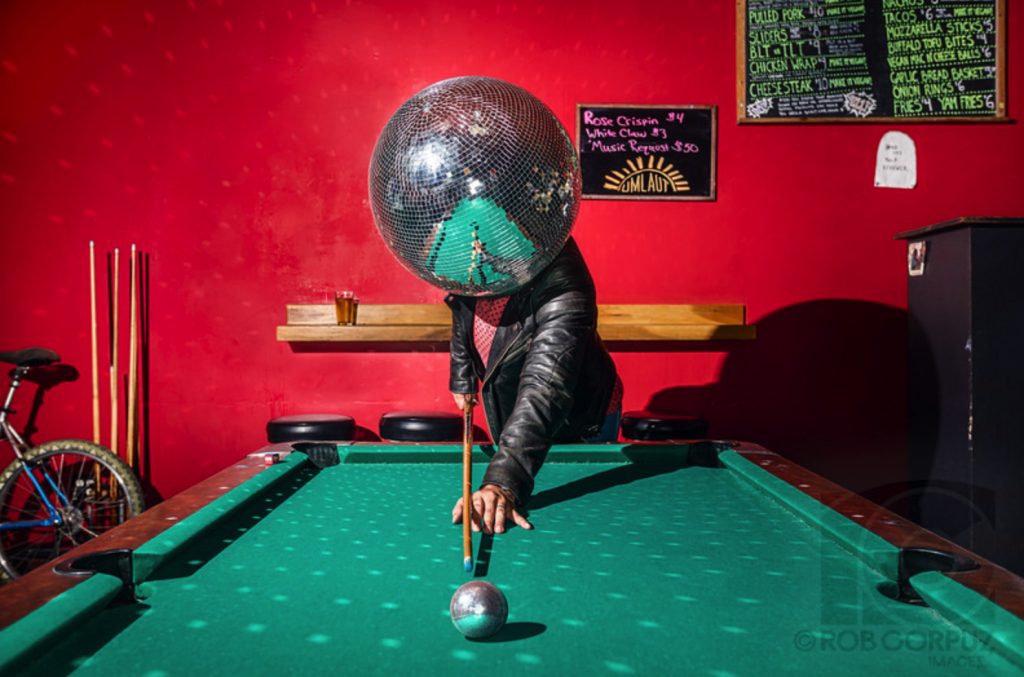 Weird Portland: What was the creative process that led to producing your photo of Dj Umlaut?

Rob Corpuz: Umlaut originally wanted some photos to promote himself as a house DJ (BTW, he’s amazing), with his trademark disco ball head.  I was immediately drawn to the challenge of making engaging portraits of a subject that had no face. The vast majority of the time, a subjects face is the first thing a viewer sees, and for a close-up, it’s the eyes.  Without these natural anchors, the surrounding environment would be especially important.

Rather than show him behind a turntable, I suggested leaning into the humorous aspects of what it might be like to have a giant disco ball for a head, by doing a series of surreal, glamorized photos that showed a day in the life of DJ Umlaut, treating it as a behind-the-scenes feature you might see in a celebrity magazine, while playing a lot with shapes and adding some weird little twists with some photo editing (i.e. the cereal bowl and computer logo in the photo above).

He was into the idea, and, during the shoot, was an amazing subject, totally game for anything, even with it being a hot day and not particularly comfortable stuck inside that ball.  Overall, I’m pretty pleased with the results, although I’ll admit I wish we had more time.  We’ve got lots more ideas for the next shoot too, so stay tuned! 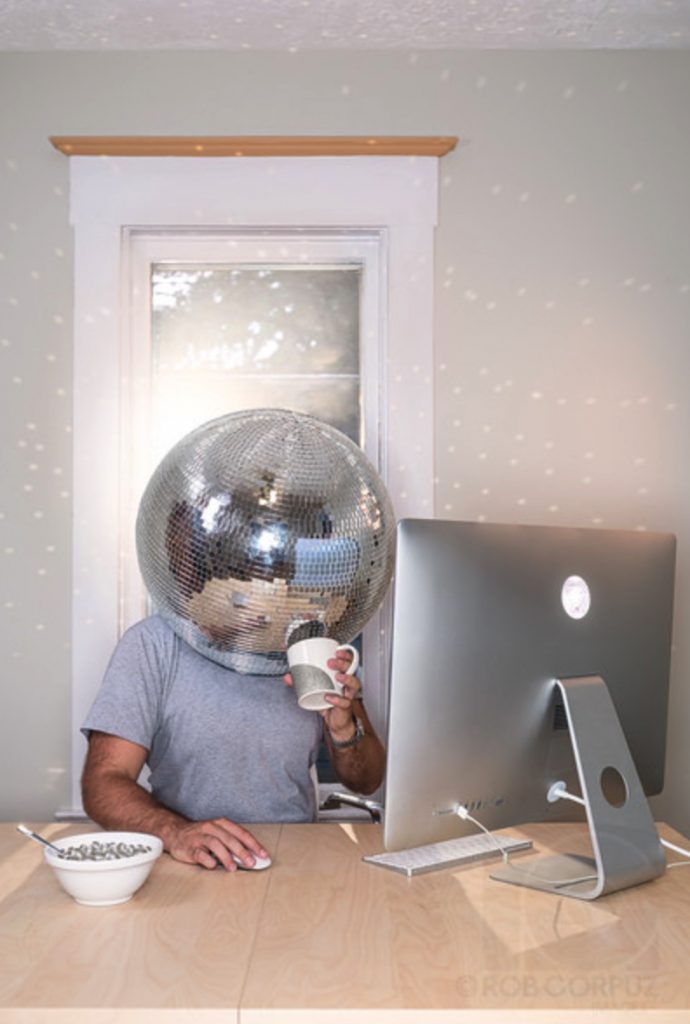 Weird Portland: What needs to be present in an image for you to get that feeling of “I got it,” or that you have achieved what you set out to accomplish?

Rob Corpuz: As I said earlier, every shoot comes with unique challenges, whether it’s simply helping a subject who typically hates getting their photo taken to feel comfortable enough to finally show a natural smile, or, as in the above photo, managing to capture a constantly moving subject who is balancing on a unicycle next to a freeway in low light while wearing a thick mask and holding bagpipes and a pumpkin, both of which are flaming.

Whatever the goal of the shoot is, if I can fully achieve it, as well as contribute my own idea, a little bit of creative spice which adds that je ne sais quoi that my client didn’t expect and loves, I’m excited. 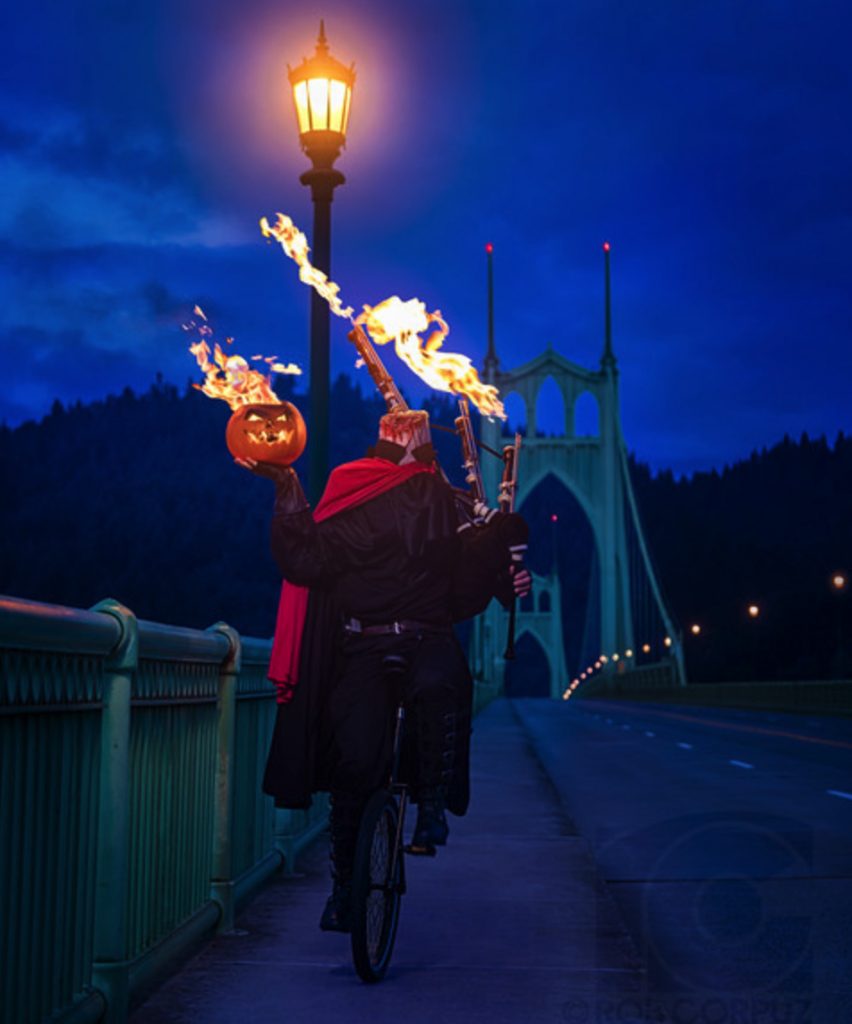 Weird Portland: As an artist, what inspires you the most?

Rob Corpuz: I’m going to get a bit dark here, but everybody dies, and I’m inspired by the idea of creating a portrait that you love so much, and that suits you so well, that when your time comes, there will be no question which photo your loved ones use for your obituary, or which one you want to leave permanently as your social media avatar.

While I love working in most photography genres, it didn’t take me long to realize that I’m most drawn to taking portraits of people.  Photography is perhaps the closest we’ve come to stopping time, to cheating our mortality. In our all-too-brief lives, photography allows us to relive wonderful moments, not to mention inspiring us to create them in the first place in order to tell a story.

And if I can help you capture who you really are, or who you want to be, in a particular moment in time, than I’m happy, but I’m always striving to create that perfect image, one that becomes your favorite, an image that’s so iconic that it will continue to represent you after you’re gone.

To read more about Rob Corpuz Photography, visit his website