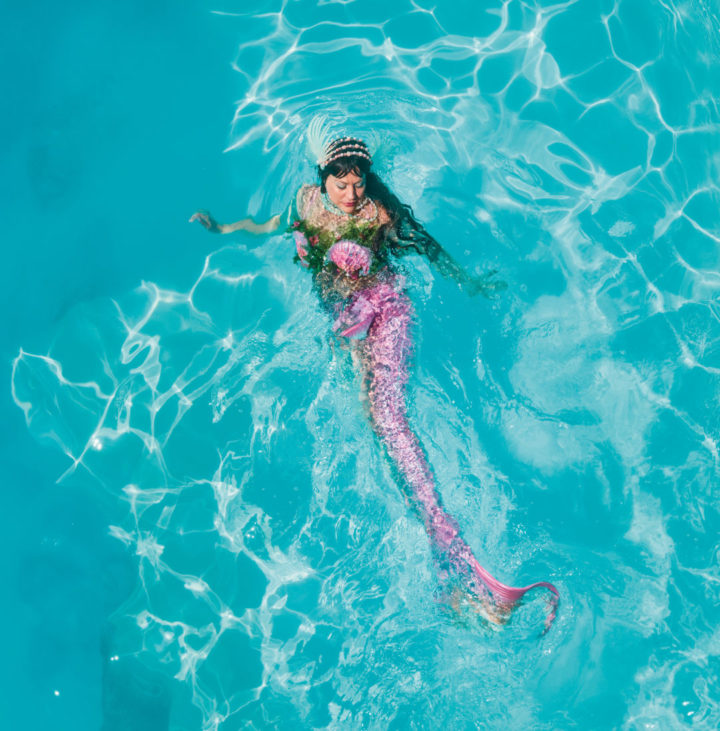 Weird Portland United is collaborating with the Portlandia Mermaid Parade to produce the 2021 Parts of Your World Walking Tour, a festival of all things mermaid and water related on July 31st from 11-5PM at Tom McCall Waterfront Park (between the Morrison Bridge & Salmon Springs Fountain). This event is free of charge, however, feel free to throw a few clams in the bucket to help cover the costs of the parade.

Una The Mermaid has been bringing magic and entertainment to the Pacific Northwest since 2012. She is the organizer and host of the annual Portlandia Mermaid Parade, Siren’s Ball, and The Traveling Fanta-Sea Cove.  She performs live underwater shows in her traveling mermaid tank, and if that wasn’t enough, is currently completing her PhD in Transformational Psychology. Una and I met via Zoom to talk all things mermaid and the history of the parade. What I thought was going to be a simple conversation about mermaids, dove deeply into body positivity, gender identity, and even social justice. After interviewing Una, I realized I want to be her when I grow up.

Anna Alexander: I want to start with a hard-hitting question: Can anyone be a mermaid?

Una: Well, a couple of reasons: One aspect of being a mermaid is about what you possess on the inside, so if you hold that belief, then anyone can be a mermaid. Second, as far as the physical component goes, even if you don’t swim or have some sort of physical limitation, there are all sorts of ways you can interact with water and be magical and celebrate that mermaid identity.

AA: I went to a story telling event years ago and a woman told a story about how she was a mermaid in a previous life and finding that out was very healing and transforming for her. Was that how your path came about?

Una: Well, I identify as a trans-humanist. Sometimes trans-humanism refers to a blend between humans and technology, however, I identify as an elemental spirit incarnated into a human body. I don’t know if I would call it a past life because a past life indicates that you were one thing and now, you’re something else. I don’t feel that I’m something else, I feel that I am that currently trying on this physical human costume.

I was born in Hawaii and spent a lot of time in mother ocean and connected with it as a child. I had deep connections with nature overall particularly with water even when I was on land, I would always be near water. I have had a profound healing experience with water. For me, water is living and has a consciousness and to be a mermaid is to tap into that deeper sense of awareness that we can all connect with on a very deep level. There’s some research done that many of us who are survivors of trauma have awakened senses of empathic abilities and I do feel a profound sense of connection and healing with water.  I’ve always considered myself a mermaid. It wouldn’t be until around 2010/2012 that timeframe when I would formally start identifying officially in that way at least publicly.

AA: How did your journey to becoming a mermaid happen?

Una: I think that part of me was always there. There’s a word called hiraeth which describes a profound longing for something that was never there, and they talk about the symbology of a mermaid sitting on a rock with her eyes toward the horizon always longing for something that’s out of her element and realm. That was always my experience because on a very core level, I experienced that deep sense of longing for peace and to also tap into a sense of inner beauty in a world where a lot of things are superficial, hurtful, and harmful. Really my journey started by seeing another mermaid. I was attending a festival and I saw a woman who was mermaiding and it awakened something in me. I was already a part of the magical communities, and my husband was reenactor (Pirate) and performer, but I didn’t really identify with those things. When I saw her in the water, I felt a sense of magic and I was like, “Wait a minute! You can do that? You can put on a tail? That’s a thing?”

I did some research and ended up making my first mermaid tail from scratch. I got my child a tail and got my start in a little inflatable pool. Just me and my kiddo and we did it for fun at one of my husband’s pirate crew events. I got tapped by someone at the event who said they were a mermaid and asked if I wanted to come meet other mermaids. I found out there was a whole subcultural world of women and men and other folks who are non-binary and a remarkably diverse community.

AA: So, you’re a mermaid and your husband is a pirate. Is your child a sea creature?

Una: My child came out to us about a year ago as non-binary transgender. An interesting part of this journey is they identify and connect with water, and they have been trying to figure out how their identify fits in with this archetype because it’s so feminized and sexualized in a lot of ways. We have been working on how they can express themselves in this world and be true to their identity and exploring oceanic and elemental beings that don’t identify as male or female and going outside of that gender binary. But they are very much a part of it and their experience has evolved over the years especially as they awakened to their own sense of inner identity. My child identifies as what’s called a Cecaelian which is a subclass of merfolk which are not mermaids but are cephalopods and identify as octo-people. My child focused on developing costumes that involve tentacles and they have a swimming octopus costume.

AA: In some of your interviews, you talk about the importance of imagination. How does that carry over into your everyday life?

Una: Because of my background in psychology and the work I was doing in the mermaiding world, I would notice that when we would interact with families and children a lot of adults were discouraging their children from having an imagination. I don’t think they were doing it to be harmful, but rather they were doing it from a place where they wanted their children to be believe what was real. When we squash that out of our children too soon, we rob our children of the ability to be creative and people undervalue the role of play. One of the things I do in mermaiding is to encourage parents and children to not take themselves too seriously and that it’s OK to play and it’s OK to have an imagination and believe in mermaids.

AA: Is there a certain type of person or demographic that gravitates to being a merperson?

Una: The demographic is people who have an affinity toward water and tend to be a bit emotional and are trauma survivors. There are individuals who long to express body positivity and we try to foster and cultivate acceptance and exploring beauty and empowerment. Our goal is to lead by example and encourage people to come out of their shell.

AA: Tell me about the Portlandia Mermaid Parade.

Una: It started as an organic event to celebrate merfolk and we were very much like, “Hey! If you’re a mermaid show up at this time, bring a tail, and we’re going to go down the promenade together.”  And that’s how it started. The first year, I think we got 800 people and we’ve been doing our best to keep it going each year.

The mermaid parade is going to have a different meaning for all different kinds of folks. At its core are people who identify as merfolk, are living a merlife, and whose lifestyles revolve around the art of mermaiding whether its as a hobby or professionally. It’s an open invitation to participate and join however it calls to you.

The mermaid parade highlights a little bit of the history of Portland’s riverways, and we’ve had a long history of what it means to get our rivers clean. We celebrate water justice and stewardship as well and it’s also about recognizing artists and creatives in Portland which is important. This is a way for the keep Portland magical community to say we’re here and we’re not going anywhere. Let’s start normalizing the weird.

AA: Tell me about this year’s parade.

Una: This year I was nervous about doing a parade with the pandemic because even in an ideal world we’re spaced out while parading, that never happens, and Poet’s Beach is rather small. I was worried people wouldn’t feel comfortable parading. Instead, I thought why don’t we have an event where the people come to us? We’ll be stationary, we’ll be fixed, and the people will walk by us and have an opportunity for interactive experiences throughout the day.

This year the mermaid tank will be there so people can see a live mermaid swimming. In conjunction with that, there will be performers and lots of interactive spaces including a story telling booth, a behind-the-scenes that will share with the community what it’s like to be a mermaid professionally or as a hobby and give people tips on what they do. There will be a play space for kids, bubbles, pirates, performers, and a mermaid mythology booth as well. There will also be spaces that focus on activism and what it means to be a water steward. We want people to dress up and come and learn about mermaids.

AA: As someone who is not a mermaid, do you have any makeup tips?

Una: Stay away from traditional glitter. A lot of folks will use crafting glitter and that is not safe for your eyes, and it is a microplastic. Glitter goes into our water and fish ingest it. What I recommend is bioglitter and there’s a couple of places in town that sell bioglitter. I know Metro Boutique on Hawthorne sells it. Otherwise, I would say skip the glitter entirely and get yourselves some shells and stick them on you and have fun with whatever colors inspire you. You can also use waterproof mascara and cream-based makeups which don’t disintegrate with water.

Note: Thanks to photographer Andy Bait, as well as Willamette Week for featured images